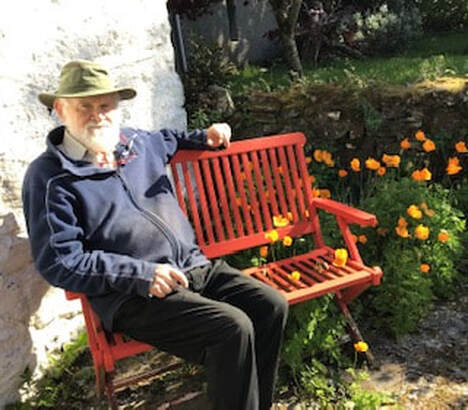 Born in UK, Emigrated and grew up in Canada .
Started work in Nova Scotia, then in various jobs in different parts of Canada. Saved enough cash to pay for a year’s study in Art School in the UK.
Became interested in ceramics and joined the Leach Pottery St. Ives Cornwall for 4 Years then returned to Canada.
Set up a pottery in Nova Scotia. Then taught Ceramics at Memorial University Nfld.
Moved back to England and taught ceramics at Portsmouth University, Hampshire.
Set up pottery workshop with Ros Harvey at Grafham West Sussex. We moved to Ireland 1988 and started to build Ballagh Studio as
studios, showroom and print workshops.
The move to Ireland meant both Ros and I moved away from 3d forms and focused on Painting and Printmaking.   I concentrated on images based on the Myths and legends of the past.
Over the years the Print Workshop gained 2 etching press, a Stone Lithographic Press, A Vandercook  Letterpress and trays of type, metal and wood and a Silk screen unit,  all used to make  Limited Edition  books.
Several invited Artists have stayed and worked with us at Ballagh Studio.